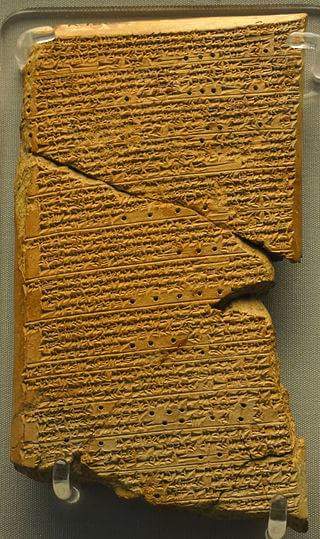 The oldest records of Astrology were discovered in Mesopotamia, with a hoard that also shows the earliest accounts of creation and a worldwide flood, which predate the accounts of Hebrew scribes by over a millenium. Four pioneer archaeologists stand out, Henry Rawlinson, Austen Layard, Paul-Emile Botta and native Kurd Hormuzd Rassam. During the mid to late 1800’s, these brave men (who risked life and limb to remove massive stone tablets) laid the foundation for Mesopotamium archaelogy. Rawlinson was the first to decipher the Assyrian language, now called Akkadian.

Of particular interest is the library of King Ashurbanipal (king of Assyria from 668 BC). He was particulary learned and was able to read ancient cuniform tablets in Akkadian and the earlier Sumerian languages. As well as being a competent mathematician, he was also an accomplished Astrologer. He received his education from Balasi, a famous Astrologer of the time. His library was a time capsule and he set out to preserve these texts for future generations. A book was also discovered, with ivory pages and wax impressions of cuneiform tablets. This includes the Astrological writings, Enuma Anu Enlil, named from it’s opening words, “When the Gods Anu and Enlil..”, informing us that Astrology was the concern of these two gods. Anu was the God of heaven and Enlil was the God of Earth. Even in today’s Astrology, the relationship between the two realms (both physically and spiritually) is key to Astrology.

The Mesopotamiams viewed both realms as complementary, depending upon one another. The earliest Astrological predictions were concerning Kings and affairs of the nation, or catasphrophies, which we now refer to as Mundane Astrology. None concerned personal birth charts. An early text, though, provides the first mention of a Zodiac and the first indication that it was divided mathematically into 12 regular signs. A tablet recording Venus setting in the sign of Pisces dates from 446 BC and the Babylonian diary for 464 BC used both zodical signs and fixed stars to coordinate stellar geography.

Astrology was to change, however, after the Persian invasion of Assyria. The emphasis moved from mass “Mundane” Astrology to the individual natal or birth charts. This new perspective was supplied by Zoroastrianism, who believed in a supreme God, Ahura Mazda, together with an immortal soul with a free choice of good and evil. The first known natal chart, from Babylon, dates from 410 BC, probably April 29th. While it uses zodical signs, there is no mention of degrees.

The mention of degrees, however, does occur in three tablets from 258-235 BC, which give zodical degrees for the Sun and all planets, except the moon.

The Druids, however, placed great emphasis on the moon and the Persian influence on the Druids is undeniable. The Dasturs of Zoroastrianism are very similar to the Celtic Druids. Astrologers of the ancient world were called Mage, or Magi and Julius Caesar applies this to the Druids. Unfortunately, records of Druid Astrology don’t occur until the 6th century, but at that time, the zodiac was very much preserved as it is today. There are some exceptions, such as Leo, being identified as a Hound. However, the majority of signs have been preserved as they were from the earliest writings.