Athenaeus was an ethnic Greek and seems to have been a native of Naucrautis, Egypt. Although the dates of his birth and death have been lost, he seems to have been active in the late second and early third centuries of the common era. His surviving work The Deipnosophists (Dinner-table Philosophers) is a fifteen-volume text focusing on dining customs and surrounding rituals. This is an extract about the eating and drinking customs of the Celts: –

“The Celts place food before their guests, putting grass for their seats, and they serve it up on wooden tables raised a very little above the ground: and their food consists of a few loaves, and a good deal of meat brought up floating in water, and roasted on the coals or on spits. And they eat their meat in a cleanly manner enough, but like lions, taking up whole joints in both their hands, and gnawing them; and if there is any part which they cannot easily tear away, they cut it off with a small sword which they have in a sheath in a private depository.

But when many of them sup together, they all sit in a circle; and the bravest sits in the middle…and the man who gives the entertainment sits next to him; and then on each side the rest of the guests sit in regular order.

…And those who act as cup-bearers and bring round the wine, bring it round in jars made either of earthenware or of silver, like ordinary casks in shape. And their platters on which they serve up the meat are also made of the same material; but some have bronze platters, and some have wooden or plaited baskets.

And the liquor which is drunk is, among the rich, wine brought from Italy or from the country about Marseilles; and this is drunk unmixed, but sometimes a little water is mixed with it. But among the poorer classes what is drunk is a beer made of wheat prepared with honey, and oftener still without any honey; and they call it corma. And they all drink it out of the same cup, in small portions, not drinking more than a ladle at a time; but they take frequent turns…” 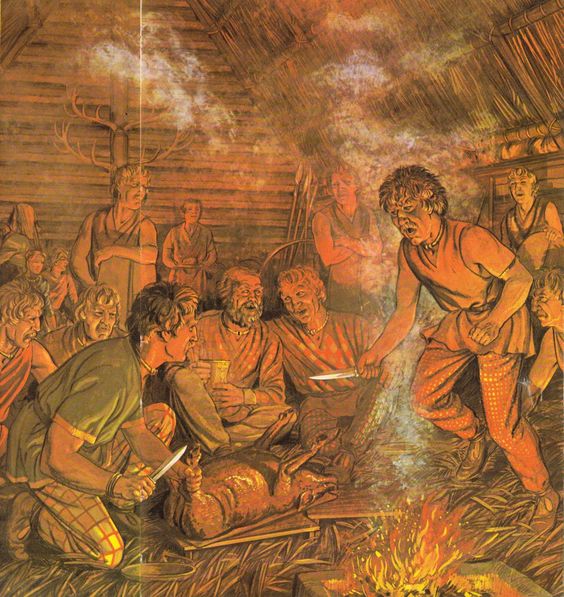